Now that mukbang is gaining popularity, do you wanna know how to mukbang and make your own video? It seems like anyone can make their own broadcast and join in on the fun. Well, almost anyone. If you’re thinking about starting your own mukbang channel, but aren’t sure what the best foods to eat are or how exactly to get started, here’s a guide that should help walk you through it.

You’ve probably seen mukbang videos on YouTube. Mukbang is short for the combination of two Korean words: 먹 (meok) means “to eat,” and 간 (gan) means “on camera,” but together, they mean “eating show.” It’s a genre of vlogging that has gained widespread popularity in South Korea.

Mukbang videos are often live streams, but they can also be pre-recorded videos that are then uploaded to video-sharing sites like YouTube or AfreecaTV. They feature an individual sitting in front of a webcam and eating large quantities of food while interacting with their audience over voice chat. People tune in for all sorts of reasons. Sometimes it’s just to hear what the host has to say. Other times, it’s for entertainment or comedic value, and there are even viewers who tune in solely for the joy of seeing someone else eating delicious food.

Viewers will sometimes send in their own requests, hoping that the host will fulfill them with a special trip to the fast-food drive-through. Sometimes, hosts will even auction off their own personal services or products during their live streams.

Now that you know what mukbang is, let’s get started making your own. Here are some tips to make sure your video is the best it can be! You should always plan ahead before starting. Choosing a location and deciding on food are two important things you should do before even setting up your equipment.

Pick a place where you can control the lighting and ambiance, but that also isn’t too distracting. Avoid rooms with strong backlighting, as this will make it difficult to see what’s going on.

For best results, try to find a circular table with a diameter of about 2 meters (6.5 feet). That way, you’ll be able to host a large number of viewers without overcrowding the camera’s view.

It’s important to make sure your webcam and microphone are of good quality. Choose a camera with the best resolution, and be sure to use an external microphone for higher-quality sound.

Be sure to test out all of your equipment before starting your broadcast. Nothing is more embarrassing than getting halfway through a mukbang only to realize the sound isn’t working or that your microphone is picking up all of the food sounds around you.

Start Small And Work Your Way Up

Broadcasting can be overwhelming at first, but with practice and experience, you’ll be able to easily stream every day like a pro! Start by broadcasting for 30 minutes, and over time, work your way up to 2 hours. 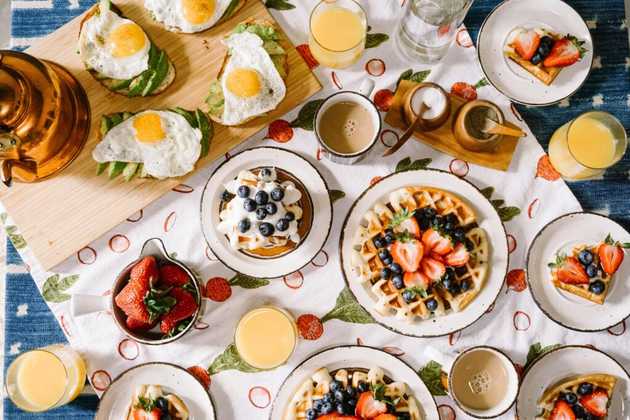 What To Eat For Mukbang

Eating on camera can be difficult sometimes, especially if you aren’t used to it. If you’re concerned about keeping your food neatly tucked away during mukbang videos, these tricks will help you stay organized while you eat!

Before you start your broadcast, separate your food into small piles. Then, arrange them in a circular pattern around the center of the table so everything is visible to your viewers.

Make sure to cut up all of your food before you start eating. This will help keep messes and spills to a minimum while also making sure that your viewers can see everything you’re eating.

Some of your viewers might get hungry while watching your stream. Make sure to check the chat periodically for any requests they may make! And don’t forget that sometimes, just having fun is enough motivation to keep them tuned in!

There are many different foods to eat during a mukbang, but if you’re just starting out, it might be best to stick with simple meals or snacks. Here are some suggestions for things you can try in your mukbang videos:

Be sure to check the guidelines for your favorite streaming sites to make sure they allow mukbang videos! And don’t forget to have fun! That’s what mukbang is all about!

How To Appear On Camera/Streaming Sites

If you want people to be able to see your face while you eat, a webcam and microphone are almost a necessity. Almost every streaming site allows for both video and audio input from a web camera and microphone so people can see and listen to you while you eat.

Some streaming sites have the option of hosting “offline” broadcasts, where users can watch videos that were filmed beforehand. Many streamers host these kinds of videos because they allow for greater flexibility when it comes to scheduling broadcasts.

The best time for broadcasting seems to be around lunch and dinner time, in order to capture people during their mealtime. However, evening broadcasts are also popular because more people tend to be at home to watch them.

Don’t forget that the quality of your webcam and microphone will have a big impact on how viewers will react to your mukbang videos, so be sure to test them out before going live!

So now that you have the equipment and set up your broadcast, what do you do? There’s not a whole lot of information available for first-time broadcasters who want to know how they should go about eating their food on camera.

In the beginning, many streamers focus on simply broadcasting themselves eating as much as possible. Some even decide to eat until they feel full or sick! However, some streamers like to eat smaller portions of food or take breaks in between broadcasts. Some viewers might get upset if they feel like you’re eating too much, but there’s no one right answer for what you should do when it comes to your mukbang videos.

Here are a few other things that many popular broadcasters focus on: