If you are new to ASMR and are looking for an affordable but good quality upgrade from your current microphone, the Blue Yeti USB Microphone should be on the top of your list.

The brand itself has a reputation for making excellent USB microphones and the Blue Yeti is one of their best and most popular models; especially with people from the ASMR community. It’s also the chosen microphone of many podcasters, streamers and musicians.

Part of its popularity is its affordable price (retailing for just around $130) and its versatile nature by being able to record in four modes: cardioid, bidirectional, omnidirectional and stereo. The availability of these different recording modes is particularly beneficial for those looking for an all-around microphone to record quality for various creative projects aside from ASMR videos.

Read on to learn more about what the Blue Yeti USB Microphone.

The practice of creating videos with the main purpose to trigger ASMR is still a relatively new endeavor. Both practitioners and listeners are still fumbling around to find the right tools and methods in order to come up with the ideal setup and use the correct mics that will be most effective in triggering tingles.

Here are is more in-depth information on the Blue Yeti to help you determine if it’s worth your money.

Let’s take a closer look at the Blue Yeti microphone and find out what kind of sound quality you can expect from it. We will also talk about its four recording modes and what type of projects you can use each in.

Considering its affordable price, the Blue Yeti produces good sound quality. Its sound range is also phenomenal. No wonder a lot of ASMR artists use the Yeti as their main microphone or as a regular one among their repertoire. Some of the people who use the Yeti are Caroline ASMR, fastASMR, ASMR RandomSPace, Angels ASMR, Euphoric Whispers and even the crowd favorite ASMR Darling.

Some people even compare the Yeti’s sound quality with that of more expensive professional microphones such as 3Dio binaural microphones which are some of the best and most expensive microphones on the market right now.

If you’re interested in seeing how the Blue Yeti performs in real life, check out this ASMR mic tingle battle between the Blue Yeti and a 3Dio binaural mic by fastASMR:

The Yeti can compete with 3Dio mics when it comes to triggering tingles through sound which is the very core goal of the ASMR practice. Listeners themselves think the Yeti is great for triggers when using objects more so than whispering and voice triggers as it tends to be a bit too over sensitive with capturing breath. The Yeti produces soft yet pronounced sounds compared to the 3Dio’s crisper and more intense ones.

Another great thing about the Blue Yeti is its versatility. As mentioned above, this professional USB microphone can record in four pattern modes with each being great for different applications.

This mode is most suitable for recording music rather than ASMR triggers. It uses both right and left channels to produce a wider sound image.

As its name implies, this mode picks up sound coming from all directions around the mic. Its great for capturing ambient noise and is recommended for podcasters interviewing multiple people. On the other hand, this mode is great for recording ASMR triggers like object rubbing. The omnidirectional mode is also the closest one that can mimic binaural sound which is the most desirable for ASMR.

In this mode, sound is captured only from the front part of the mic. It’s preferred by people who are after a solid and full-bodied sound.

This mode is best for use in 2-person interviews and recording duet vocals.

Every microphone has “self-noise” or those low hissing, buzzing or crackling sounds that a mic automatically produces just by being used. However, some mics are built better to keep their self-noise very low and almost unnoticeable.

Making ASMR videos involves very low sounds which makes a mic’s self-noise become more pronounced in the recording. It is important that you choose a microphone with a very low self-noise to avoid this problem. We recommend that you look for a mic with a self-noise that won’t exceed 15 dBA.

The problem with some mics is that their manufacturer doesn’t specify their product’s self-noise information. Case in point, the Blue Yeti’s self-noise isn’t listed in its official specifications. If that’s the case, you can then look for a mic’s signal to noise ratio (S/N) instead. The signal to noise ratio is another way to gauge a microphone’s self-noise. A good S/N is around 80 dB and above. The Blue Yeti has an impressively high S/N of 100 dB making one of the quietest microphones at its price point.

Still, a lot of users complain about the Blue Yeti’s dismal noise performance for ASMR. To help you deal with this, here is the best setting you can put your mic in to get the best sound quality it can offer.

The good thing about the Yeti is that it has a headset jack which you can utilize to monitor the sound quality of your recording while you’re recording it.

The Blue Yeti is a solid yet good-looking microphone. It has a sleek and professional design that will surely look good on camera. It comes in four colors: silver, blackout, whiteout and cool grey. Holding the mic, you’ll immediately notice its solid weight and how its parts are put together well. The mic doesn’t feel cheap at all despite being one of the most affordable professional microphones for ASMR and podcasting.

Along its body, you’ll find controls for microphone gain, muting, headphone volume and pattern selection giving you full control over your recording.

Another thing we like about the Blue Yeti USB mic is that it is very easy to setup and use. It works as a plug and play mic. All you’ll need to do is connect it to a computer using a USB cable. You won’t need to download any more drivers or software to make it work.

Just open up a recording program like Audacity, Logic Pro or GarageBand once you’ve plugged in your mic and you can start recording. 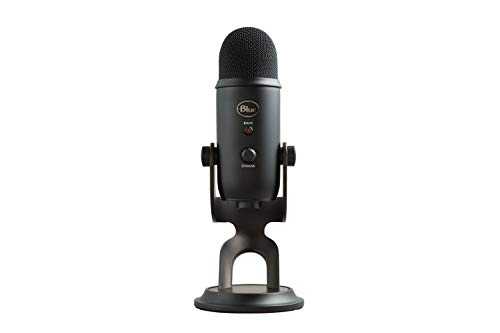 Compared to Other USB Microphones

The Yeti is comparable when it comes to price point and quality with the Rode NT-USB microphone. The Rode mic retails for a little bit more than the Yeti but doesn’t have the same high quality build. However, it performs better when it comes to reverberation control. The Yeti produces clearer sound and a wider sound range but tends to pick up everything: even undesirable noise such as a cooling pad’s fan and the like which isn’t good when you’re doing ASMR videos.

We’ll go ahead and say that the Blue Yeti USB microphone is the best mic you can get for under $150. Despite some minor setbacks, it has a lot of great features going for it.

Its four recording modes will enable you to record good quality audio for ASMR videos, podcasts, music and more. You’ll also get to control your recording as you record it.

What more, it’s very easy to use. It works as a plug and play microphone which you can connect to your computer to record. No need to buy a separate recording device which can get pricey as well.

The only deal breaker we can think of is that this mic tends to pick up quite a bit of noise despite its good signal to noise ratio of 100 dB.