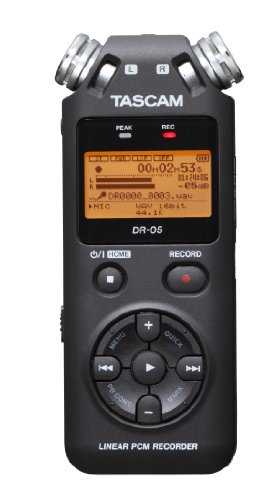 Most microphones need a separate recording device in order to work and actually record audio. While there are plenty of affordable options for both microphones and recorders, some may still find it too expensive to shell out for both at the same time.

That’s why we highly recommend that beginner ASMR artists start out with a portable recorder that has good built-in microphones like the Tascam DR-05.

The Tascam DR-05 is a lightweight digital recording device that retails for around $80 to $100 depending on where you get it.

While its two omnidirectional microphones aren’t cut out to record voice, they’re great for recording ASMR triggers like scratching, brushing and tapping. What more, you’ll surely get clean audio from this device with its impressive signal to noise ratio of 92 dBA.

It records audio as either an MP3 or WAV file and runs on two double A batteries which can last for up to 17.5 hours of use.

The Tascam DR-05 has two built-in omnidirectional microphones that can record sound of up to 125 dB while still being sensitive enough to capture subtle sounds. This makes is suitable for a variety of audio recording purposes aside from ASMR.

This recorder’s microphones are able to produce clean, quality sound because it is constructed to have two separate power supply paths and separate circuit boards for analog and digital functions. These enable the device to produce little to no self-noise.

Another great thing about the Tascam DR-05 is the amount of control it offers its users. Equipped with a backlit digital screen, you can browse through various effects and recording modes and control things like gain, reverb and the like.

The Tascam’s reverb effect is intended for recording voice and instruments to add natural resonance on the recorded audio. It can also be used during playbacks. It can also be programmed to auto record and pause. Just a warning, the Tascam will automatically pause recording and standby whenever the input signal falls below nominal levels after more than five seconds while recording. Be sure to always monitor the screen while your recording triggers to make sure that the device doesn’t stop recording.

As we’ve mentioned before the Tascam DR-05 is ideal for recording triggers that involve tapping and scratching as it doesn’t jive well with vocal audio.

Some of the Youtubers that use this recorder with built-in mics for their ASMR channel are White Tea ASMR, Veronika S ASMR, Caroline ASMR and ASMR RandomSpace.

The Tascam has impressively quiet built-in microphones. They perform well even with extremely low levels of volume which is great for recording ASMR triggers which usually rely on minute sounds.

However, some people don’t like the Tascam’s oversensitivity as the simple pushing of buttons can be heard on the recordings. There is also the problem of the Tascam producing static sounds whenever its plugged lines are disturbed.

Another issue that people who have used this Tascam recorder as a microphone is that a persistent buzzing noise is sometimes heard whenever the device is used at the highest level.

The Tascam DR-05 looks like any other portable recorder out there just with a more intuitive control layout. It has been ‘revamped’ for one thumb operation with controls for functions such as recording, deleting and level adjusting just being one press of a button away.

The device is powered by two double A batteries which can last for up to 17.5 hours of recording. It also comes with plug-ins where you can connect external microphones. This is convenient especially for when you decide to upgrade to better microphones in the future.

It also has a 3.5 mm jack for headphones if you want to be able to monitor your recording as you work. Playback can also be heard through the device’s built-in speakers found on the back side of the body.

Meanwhile, it has a tripod mount on its base so you can safely screw it in while you record with it.

This Tascam recorder weighs just about 116 grams making it very lightweight and portable.

Perhaps what beginner ASMR artists will appreciate most about the Tascam DR-05 is that you won’t need other equipment (aside from your camera) to start recording with it. It’s an all-in-one device that acts as both recorder and microphone.

Once you press record, all audio it captures is directly saved onto the memory card that’s plugged into the device. After recording, you can simply copy your audio files onto your laptop and start syncing your audio to your video. You can record in either MP3 or WAV file formats which are compatible with most audio and video editing software.

Compared to Other Recorders with Microphones

We often see the Tascam DR-05 pit against or compared to the Zoom H1 recorder. They’re very similar when it comes to build, intended purpose and price range. The Zoom H1 also retails for under $100.

However, we found that the Tascam recorder is built better than the Zoom. This is especially noticeable when you compare each’s control buttons. Another advantage of the Tascam DR-05 is that it has a port for external mics which the Zoom H1 lacks.

One thing that the Zoom H1 has going though is its very small size. The Tascam DR-05 is already portable and lightweight but it is twice the size of the Zoom H1. So, if size is an important criterion for you, then you might prefer the Zoom recorder.

The Tascam DR-05 is a great choice for an entry level recording device for people who are on a budget. It offers the dual purpose of being both a recorder and a microphone. Though it doesn’t have the best sound quality out there it can compete with more expensive microphones when it comes to noise performance.