Have you ever been in a room with two speakers and heard the sounds coming from them enter your ears differently?

You can tell where one speaker is by the sound it makes, because it comes through one ear at a different volume than it does through your other ear.

This is what the 3Dio Free Space Binaural microphone offers you!

The 3Dio FS is a binaural recording system that uses two omnidirectional microphones to capture 360-degree sound from the user’s ear level.

The resulting audio can be played back with any pair of headphones, and it’ll feel like you are standing in the middle of the sound!

Today, we’ll tell you all you need to know about the 3Dio FS microphone system and whether or not it’s worth your money.

So, are you ready to learn more? Read on! 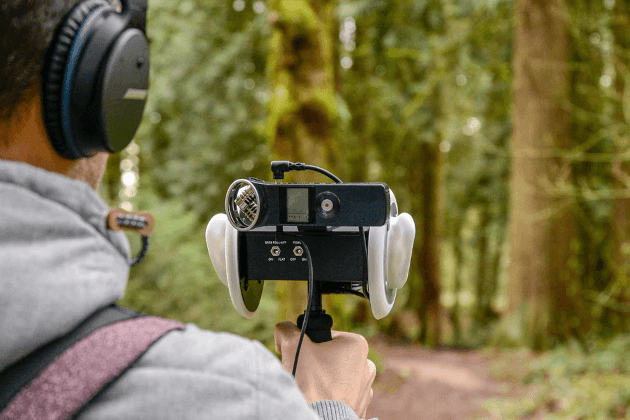 What is Binaural Audio?

The 3Dio FS microphone uses a process called binaural recording (as you can see in its name!). However, what does that actually mean?

Binaural audio is a recording technique that uses two microphones to mimic how our ears hear the world.

This means that when you’re listening to binaural audio, you’re hearing the sound as if you were there.

You can hear sounds above or below you and to the sides, just like your ears would pick them up if you were standing in the same place as the microphones.

You can also experience a sense of depth and distance in binaural audio that isn’t possible with regular stereo recordings.

This makes it ideal for virtual reality applications and other immersive experiences that rely on audio.

The 3Dio Free Space Binaural microphone is designed with several advantages, making it one of the best for recording high-quality audio.

These advantages include the following:

It Captures the Listeners’ Attention

Nowadays, our brains are used to how recordings sound. So, whether you’re listening to something on big speakers or small headphones, you’ll typically hear the same volume from both sides.

However, that isn’t how the human ear works---which is why the 3Dio FS microphone can be so surprising.

It has a lot of directionality, which makes it feel like you’re hearing something as if it were right next to your ear.

It can be beneficial for filmmakers, podcasters, and other audio-based creators. It’s especially useful for ASMR recordings!

However, what would it be like if you were told to close your eyes and imagine yourself sitting in front of an old fireplace? Then, perhaps you start to hear someone tapping on a hard surface. Chances are, you’re going to feel something.

And that something would be ASMR! This microphone captures even the most subtle sounds and broadcasts them to your audience as if they were there in person.

Lightweight and Easy to Carry

The 3Dio FS weighs around 1.5 pounds, so you can easily carry it in a backpack or bag. This makes it ideal for musicians who want to take their microphones with them when they go on tour or record at remote locations.

It’s also perfect for journalists who need to record interviews on-site. Plus, it won’t feel too heavy if you carry it on your arms or back for long periods.

The microphone is also compact, so it doesn’t take up much space in your bag. At just 7.5 inches wide, 4.5 inches high, and 7.5 inches deep, it’s a good fit for small spaces.

It Creates an Immersive Experience

The 3Dio FS microphone also has an omnidirectional polar pattern, which means that it picks up sound from all directions at once.

This is a huge advantage when recording things like ambiance and nature sounds because you can capture the entire environment without moving the microphone around.

The omnidirectional polar pattern means that users don’t have to worry about where they point their heads as they move through the VR environment---the microphone will pick up sounds in every direction around them.

Basically, it makes the environment and landscape around the listener come alive with life.

However, how does it achieve all that? Let’s take a look at the intricacies of this fantastic device!

The Design of the 3Dio FS 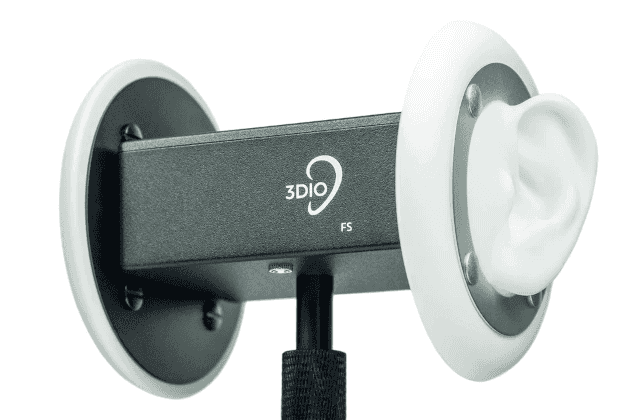 The first thing that will catch your eye when you see the 3Dio FS microphone is its unique design. Unlike most microphones, this one is shaped like human ears!

But does that actually help? Surprisingly, yes!

If you look at your ears in the mirror, you’ll find that they have a few curves and folds---and those aren’t just for show!

The curves and bends of your ears are essentially there to heighten and channel sound waves directly into the ear canal.

3Dio took this fact into account when designing their microphone.

The shape of their microphone mimics human hearing capabilities by creating a makeshift pressure zone around each of the mics where air flows freely into the mic’s chamber.

This makes the mic ideal for capturing the nuances of sound.

As the sound waves enter the ear-shaped microphone, they encounter the microphone capsules (the Primo EM172). Essentially, those capsules are the heart and soul of this device.

The microphone capsule is the part of the microphone that picks up and converts the sound waves into electrical signals. It’s also responsible for the range of frequencies your microphone can cover.

The 3Dio FS has a solid low-to-mid spectrum frequency response, ranging between 60Hz and 20kHz. However, what does that really mean?

Basically, the frequency response is the range of frequencies your microphone can capture.

That’s why it’s vital to know your microphone’s frequency response so you can understand how much coverage it has and what kind of sounds it can capture.

For example, if you’re recording something with a lot of bass, you’ll need a mic that can capture that low-end sound.

However, if you were recording a soprano or string instrument, you’d want to ensure that your mic could pick up the high-end sounds just as easily as the low-end ones.

That’s why the 3Dio FS microphone is more versatile than others---it can capture a wide range of frequencies, from soprano vocals to bass instruments and everything in between.

One of the main things that people often overlook when they’re buying a microphone is its signal-to-noise ratio (SNR). In fact, this is one of the details that separate good microphones from bad ones.

The signal-to-noise ratio measures how much background noise there is in your recording and how much of the source sound you’re trying to capture.

Generally, anything from 60 dB to 79 dB is considered acceptable. On the other hand, anything over 79 dB is excellent!

So, what’s the SNR level for 3Dio Free Space Binaural, you might wonder? Well, it’s actually around 80dB!

That means that you can expect to get a crystal clear recording every single time. So if you’re looking for a microphone for ASMR or podcasts, this is definitely one of the best choices on the market today.

The Drawbacks of the 3DIO Free Space Binaural Microphone

It’s clear that 3DIO Free Space Binaural Recording has a lot of potential. However, there are some minimal drawbacks to the device that might make it a little less desirable for some.

These drawbacks include the following:

It Comes With a Short Cable

The 3Dio FS microphone comes with a 3.5mm jack cable that’s just a couple of inches long. Unfortunately, this can be a problem if you’re trying to record something far away from your computer or recorder.

If you need a longer cable, you’ll have to buy one separately or use an extension cable instead.

It Has a Rigid Setup

The 3Dio FS microphone is mainly designed for stationary recording---so it doesn’t have any kind of mount or clip that would allow you to attach it to yourself.

You can only attach it to the microphone stand by screwing it in from the bottom, but you can’t change it or mount it from the top.

While this isn’t necessarily a drawback as much as it’s an inconvenience, it does mean that there are some things you won’t be able to do with this particular device.

If you’re on a tight budget, then the price tag might be a bit much for you---especially when there are plenty of other options out there at lower prices.

However, only a few can deliver the same quality and reliability as this one. It’s an excellent investment because you won’t need to replace it for quite some time, so if you can afford it, then by all means, go for it!

The 3Dio Free Space Binaural is a great microphone for those who are looking to jump into binaural sound recording.

It’s not the most affordable option, but if you’re serious about creating immersive ASMR videos, for example, then it’s worth the extra money.

This microphone has a wide frequency range and is excellent at capturing the rich sounds of the natural world.

If you’re not sure how to use binaural sound yet, this device will help you become familiar with it. The best part is that there’s no need for any special equipment or software---just plug in and start recording!